National Transportation Safety Board investigators said Tuesday (January 28th) that the helicopter carrying Kobe Bryant, his daughter and seven others that crashed on Sunday, killing everyone on board, didn't have a recommended warning system that alerts the pilot if they're too close to the ground. However, it's not clear the warning system would have prevented the crash, because pilot Ara Zobayan may have lost control of the copter, which banked left as he was climbing out of the clouds in heavy fog and began a sudden 1,200-foot fall that lasted nearly a minute before the crash into a Calabasas, California, hillside. The NTSB's Jennifer Homendy said, "This is a pretty steep descent at high speed. We know that this was a high-energy impact crash." The remains of the final victims were recovered yesterday, and the bodies of Bryant, Zobayan, and two other passengers have been identified so far.

Kobe at Church Hours Before Crash:Bryant went to church and prayed early Sunday morning, just a few hours before the crash. Father Steve Sallot said Kobe was at Our Lady Queen of Angels Catholic Church in Newport Beach, which his family regularly attended, ahead of that morning's 7 a.m. mass. Sallot told KCBS, "I was coming in the same door as he was going out, we called that the backhand of grace." He said they shook hands and chatted, and Bryant said someday he wanted to receive the sacrament of confirmation.

Emotional Shaquille O'Neal Remembers Kobe:An emotional Shaquille O’Neal remembered his former L.A. Lakers teammate through tears last night, saying at the start of TNT's pregame show that he never could have imagined anything like Bryant's death. He said, "Listen, people are going to say take your time and get better, but this is going to be hard for me." O'Neal and Bryant helped the Lakers win three straight NBA championship from 2000 to 2002, but occasionally feuded during those years. However, they eventually mended their relationship, and Shaq said they texted frequently, although they hadn't seen each other since the last day of Bryant's career in 2016.

Fans Continue to Gather at Staples Center:Fans gathered at L.A.'s Staples Center, home of the Lakers, for a third straight day Tuesday, with thousands crowding the pedestrian plaza to remember Bryant. Arena officials opened the adjacent Chick Hearn Court to pedestrians to allow more space for memorials of flowers, balloons, photos, paintings, jerseys, hats, basketball and handwritten messages. The Staples Center also set up more than a half-dozen large white billboards with the words, “In Loving Memory of Kobe Bryant” for people to write messages, and three of them were full by noon.

It's sobering and uplifting to see so many people of all walks of life come together in the face of tragedy to show respect and appreciation for Kobe, Gianna and all involved. #StaplesCenter#Mamba#Lakers#Lakers24#MambaForever 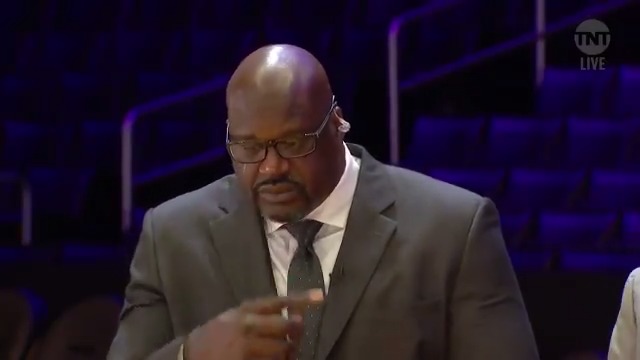 78.6K people are talking about this