The World Health Organization on Wednesday (May 20th) reported the largest one-day increase in global coronavirus cases since the pandemic began, 106,000 in the previous 24 hours. Almost two-thirds of those cases were in just four countries, with a WHO epidemiologist confirming to CNN that they are the U.S., Russia, Brazil and India. WHO director-general Tedros Adhanom Ghebreyesus said at a news conference, "We still have a long way to go in this pandemic," and expressed concern about the growing number of cases in poor countries. In the U.S., there were more than 93,400 deaths as of last night, according to Johns Hopkins University's count, and more than 1,551,000 confirmed cases.

Two studies published yesterday (May 20th) had positive results suggesting that recovering from infection with the coronavirus may lead to immunity from reinfection. In one study, nine monkeys who were infected with the virus and then recovered didn't get sick after being exposed to the virus again. Dr. Dan Barouch of the Center for Virology and Vaccine Research at Harvard's Beth Israel Deaconness Medical Center, whose studies were published, said, "It's very good news." In the other study, 25 monkeys were given six prototype vaccines, and then were exposed, along with 10 control monkeys, to the coronavirus. Barouch said there was a, quote, "substantial degree of protection" in the vaccinated monkeys, and eight of them were completely protected. All of the control animals had a high degree of virus in their noses and lungs.

Centers for Disease Control and Prevention officials told CNN they are being sidelined in battling the coronavirus by a White House whose decisions they contend are being driven by politics instead of science. Six mid- and higher-ranking staffers at the CDC, which has traditionally led the U.S. response to infectious disease, spoke on condition of anonymity, saying the result has been to make the crisis worse. One CDC official said, "We've been muzzled What's tough is that if we would have acted earlier on what we knew and recommended, we would have saved lives and money." The report cited sources as saying the start of the lack of trust between the White House and CDC began when the CDC botched getting a coronavirus test created and distributed in early February. Things got worse late in February when high-ranking CDC official Nancy Messonnier warned Americans that the, quote, "disruption to everyday life might be severe" at a time when President Trump was downplaying the threat.

Just after U.S. automakers restarted their factories Monday after a two-month shutdown because of the pandemic, Ford temporarily stopped production at two of its assembly plants in Chicago and Dearborn, Michigan, on Tuesday and Wednesday after three autoworkers tested positive for the coronavirus. The work was stopped to sanitize equipment and isolate workers who were in contact with the infected employees.

The National Safety Council said Wednesday (May 20th) that the rate of fatal crashes in the U.S. spiked 14 percent in March compared to the same month last year, an increase that it called "alarming." The jump in the number of fatal crashes per 100 million miles driven came even though the number of miles driven in the U.S. plunged due to coronavirus pandemic stay-at-home orders, and the lockdowns didn't start until the middle of March. The Safety Council cited reports from states of an increase in speeding and reckless driving on highways with not much traffic on them because of the stay-at-home orders.

One dedicated daughter went viral after bundling up in an inflatable hippo costume to greet her mom with a hug at the Virginia retirement home where she lives after being separated in quarantine. Nick Bolerjack posted footage of the precious moment on Twitter. Bolerjack’s grandmother-in-law resides at the Fox Trails Senior Living Home in Stephens City. Fox Trails is allowing family members to hug residents in such "sterilized suits." In the video, Bolerjack's mother-in-law can be seen approaching her mother -- while wearing the hippo suit -- with outstretched arms.

My mother-in-law hugging my grandmother in an inflatable hippo suit wearing a tutu is the content you needed today. Her nursing home is letting family members hug each other in these sterilized suits 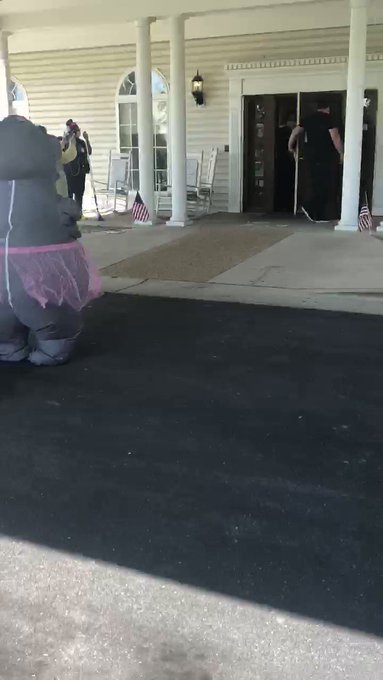