Protesters took to the streets for a sixth day Sunday (May 31st) after the death of George Floyd, and as in previous days, the largely peaceful demonstrations against police brutality across the country took a dark turn in some places, particularly as night fell, with looting, vandalism, fires set, and confrontations with police. This despite curfews being put in place in many cities and thousands of National Guard soldiers deployed in 15 states, including in Minneapolis, where Floyd died after a police officer kneeled on his neck for more than eight minutes as he repeatedly cried out that he couldn't breathe.

Police fired tear gas and stun grenades into a crowd of chanting protesters last night in Lafayette Park across from the White House. After that, some set a fire in the street, which engulfed a building that has a maintenance office and bathrooms. A fire was also set in the basement of nearby historic St. John's Episcopal Church, but it was quickly put out by firefighters. National Guard soldiers were deployed to help deal with the situation. Meanwhile, AP reported that as people also demonstrated in Lafayette Park on Friday night, Secret Service agents briefly rushed President Trump to an underground bunker at the White House. He, his wife Melania and their son Barron were reportedly there for about an hour.

Extremist Infiltrators:Federal and state officials are looking into evidence that far-left and far-right groups may be infiltrating the protests with the aim of turning peaceful demonstrations violent. Trump and Attorney General Bill Barr over the weekend blamed anarchists and members of antifa, an umbrella name for far-left militant groups that turn out to resist neo-Nazis and white supremacists at demonstrations. Barr said the FBI would use its regional joint terrorism task forces to identify what he called "criminal organizers," and Trump threatened to name antifa a terrorist group. However, experts on extremist groups are also seeing evidence of members of the far-right involved, such as white supremacists, members of the Proud Boys, and of the "Boogaloo movement, who want a second civil war.

Special Prosecutor Named:Minnesota Governor Tim Walz said Sunday that he's named state Attorney General Keith Ellison as a special prosecutor to look into Floyd's death. Walz acted at the urging of Floyd's family members and leaders in Minneapolis. Meanwhile, attorney Benjamin Crump, who's representing Floyd's family, said Derek Chauvin, the officer who had his knee on Floyd's neck, said Chauvin may have known Floyd since they apparently both worked as security at the same nightclub, and called for him to be charged with first-degree murder. Chauvin and the three officers who'd been with him were fired the day after Floyd's death last Monday, and Chauvin was arrested Friday and charged with third-degree murder and second-degree manslaughter.

Trump, Biden Respond:ABC News reported Sunday that there's a growing divide in the White House over whether Trump should address the nation from the Oval Office. The report said some, including his son-in-law and senior adviser Jared Kushner, think there's no political benefit to it since when Trump has done it a few times in the past it hasn't turned out that well. But others, including White House Chief of Staff Mark Meadows, believe it's a chance for Trump to show he's a strong leader and unifier. Trump did not appear publicly yesterday, but tweeted during the day, including accusing the media of, quote, "doing everything within their power to foment hatred and anarchy," and urging Democratic mayors and governors to, quote, "get tough," saying, "The World is watching and laughing at you and Sleepy Joe."

Meanwhile, presumptive Democratic presidential nominee Joe Biden visited a site in Wilmington, Delaware, yesterday where there have been protests. There were posts on his social media that included a photo of him kneeling across from a black man and child, and videos of him taking photos and speaking with other men there. He wrote in the posts: "We are a nation in pain, but we must not allow this pain to destroy us. We are a nation enraged, but we cannot allow our rage to consume us. We are a nation exhausted, but we will not allow our exhaustion to defeat us. The only way to bear this pain is to turn all that anguish to purpose." 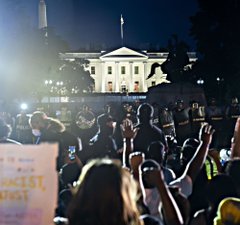 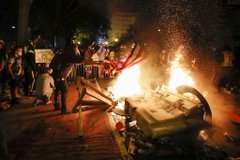 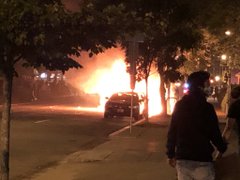 750 people are talking about this

A tanker truck drove into a throng of protesters on a closed interstate near Minneapolis. The driver was pulled from his rig and beaten https://reut.rs/36O3k9k 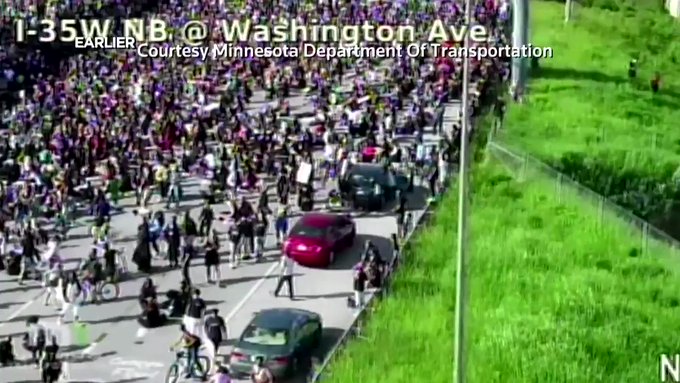 470 people are talking about this

We are a nation in pain right now, but we must not allow this pain to destroy us.

As President, I will help lead this conversation — and more importantly, I will listen, just as I did today visiting the site of last night's protests in Wilmington. 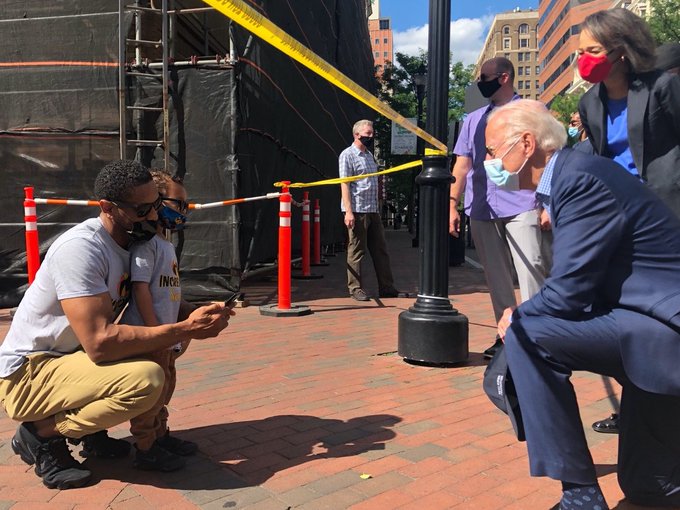