Certainly Central Ohio saw lots of rain yesterday...  totals are impressive with spotters reporting rainfall of 2.8 inches in Clark County, 2.56 inches at the Fairfield County Airport, and a whopping 3.8 inches in new Lexington.  The Dispatch reports...

“We think a tornado did touch down. Fortunately, everybody is OK,” said Don Walters, public information officer for Grove City.

Seven people were trapped in vehicles on Hoover Road near Orders Road because live wires fell down on them as the initial storm hit around 5 p.m., officials said. Utility crews had to remove power to those wires before emergency responders could get occupants out. A male teenager was the last person to be freed after 10 p.m. Tuesday — more than five hours later.

A number of residents in Grove City reported seeing a large wall cloud before the initial storm. Walters said pictures and damage afterwards looked like it might be a low-level tornado (EF-0 or EF-1). Or it could have been strong straight-line winds. That’s for the NWS crew to determine.

From WHIO TV in Dayton

National Weather Service investigators will visit Greene and Clark counties this morning to confirm reports that a tornado touched down Tuesday afternoon.

Significant damage to trees, barns and other buildings spans from Ludlow Road to Clifton Road in the area of U.S. 68 and Ohio 235, according to firefighters.

"The damage does appear to be more than straight line winds when you look at the patterns,” said Scott Dorsten with the Beavercreek Twp. Fire Department.

Video shared on Twitter by Matt Bruning shows the wall cloud in the distance as hail falls on cars in southern Franklin County. 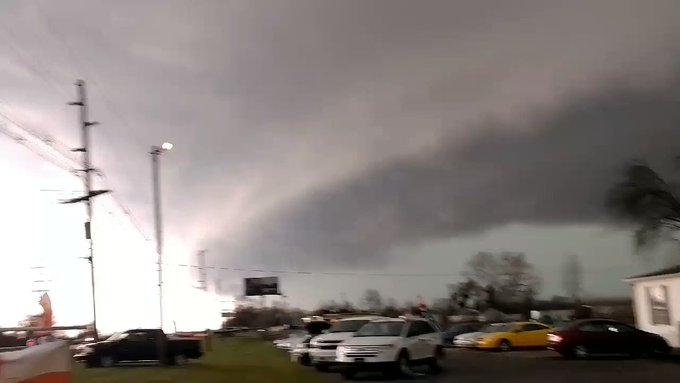